India is the largest producer and processor of cashew nuts in the world. India grows approximately 700,000 tons of cashews and imports about 60% of the nuts it processes. India processed about 11,80,000 tons of raw cashew nut seeds through 3650 cashew processing mills scattered in many states of the country which increased rapidly. In India, the cashew-growing season is from March to May. Once they are harvested, the cashews are sent for processing, which takes place in factories and at workers’ homes. 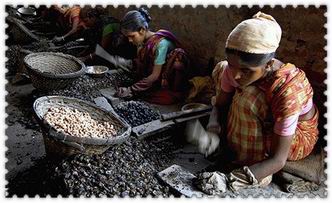 Cashew nut processing can be divided into different steps: cleaning, soaking, steaming, shelling, grading, drying etc. Among these steps, cashew nut shelling is the key of success of the production and this is the most difficult operation in cashew processing, too. The objective of shelling is to produce clean, whole kernels free of cracks. In India, this operation has always been done manually mostly by cheap female labor, and cashew nut shelling is labor intensive. Other countries have difficulty in competing with the great skill and the low wages of the Indian workers. Therefore, India has enjoyed a virtual monopoly of cashew processing for a long time. 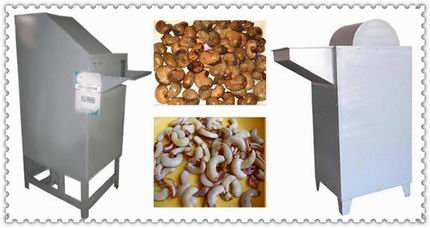 In India, raw cashew nuts after steaming and cooling are placed on a flat stone and shelled to remove kernels with the help of hand cum pedal operated shell cutter. The separation of cashew kernel from the cut steamed nuts is carried out manually by using the sharp knife. An average sheller can open one nut in about six seconds or ten nuts per minute. In an eight-hour working day, this amounts to about 4,800 nuts or about 5kg of kernels. At an extraction rate of 24%, this quantity corresponds with about 21kg of raw nuts per day or about 7 tons per year. However, experienced shellers in India can produce around half as much again, with a quality of 90% whole kernels.

However during the cashew nut shelling process, the nuts produce a caustic liquid that burns the skin and hand protection is available, so wood ash for covering the shells or gloves are required to counteract the acid. Even so, the protection is limited, and cashew workers often suffer from burning rashes and eye irritation.