You are here:Home-Application-Economic Values of Processing Shea Nut

I. About Shea Butter Tree 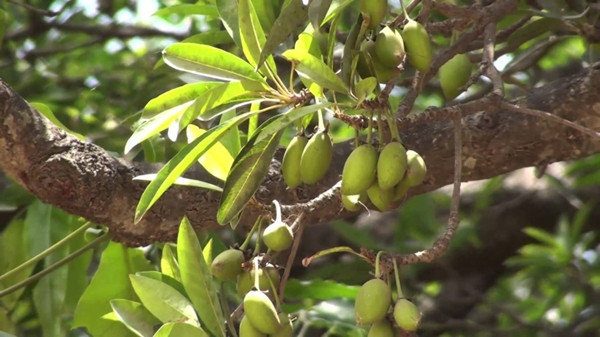 The shea butter tree (Vitellaria paradoxa), also known as karité in French, is an important non-timber forest product(NTFP). The tree is indigenous to Sub-Saharan Africa and belongs to the family Sapotaceae. It grows naturally in the wild in the dry Savannah belt of the West Africa and parts of Eastern and Central Africa. The shea tree usually starts bearing fruit when it is 20 years old. They can take up to 50 years to mature and will continue to bear fruits for up to 200 years.
The fruit consists of a pulp that surrounds a nut which has a shell that houses the kernel that is dried and stored for processing into shea butter. The main shea nut producing countries include Burkina Faso, Mali, Ghana, Nigeria, Côte d’Ivoire, Benin, Togo, and Guinea. The total production capacity of these countries was estimated at 600,000 tons with 350,000 tons exported in 2008.
Almost every part of the shea butter tree has its use. The wood is termite resistant and used for building. The pulp is eaten by people and is also an important food source for many organisms including birds and bats. The shell is used as a waterproofing material on the walls of mid-buildings. The pulp, bark, roots, and leaves are used in traditional medicines.

Shea butter is in high demand on the international market. The global demand is valued at about $10 billion and is projected to be over $30 billion by 2020. 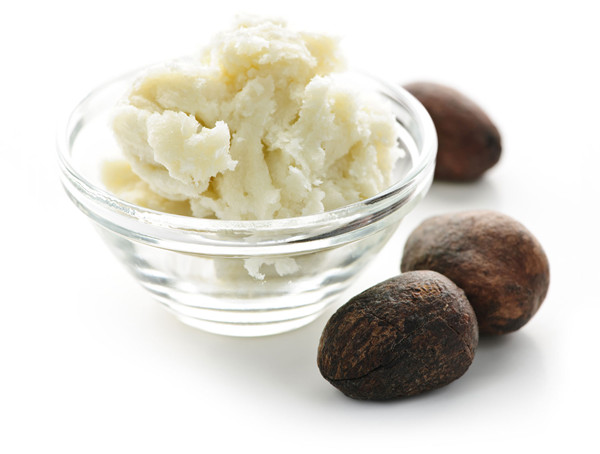 Shea butter is rich in Vitamins A, E and F. It is used as cooking oil, in the cosmetics industry to make skin moisturizers and hair-care products, and also as an ingredient in pharmaceutical industries. Shea butter is also used as a substitute for margarine and cocoa butter in the food industries. It is also used in making soap and candles.
Shea nut cake (SNC), the residue that remains after the extraction of shea butter, serves as excellent fuel. It is a good ingredient for livestock feed formulation as well as for the treatment of skin diseases. The cake is also ideal for use as manure and fertilizer production. For every metric tonne shea nuts processed, 450-600 kg of shea nut cake is produced.
Shea butter is called “women’s gold” in Africa, as it provides an invaluable source of income for women to support food, clothing, and education. More than 16 million women living in rural communities collect shea fruits and process the kernel into butter. The traditional manual method dominates, which is passed down from generation to generation. The method is time-consuming, physically exhausting and extremely labor intensive, requiring large quantities of water and fuelwood often carried from long distances.

From April to August each year, the ripe (fallen) shea fruits are collected by hand from the ground under the shea tree.

The fruit pulp is removed by hand, by feeding the fruit to animals or by fermentation. By fermentation, the shea fruits are buried in pits which causes the pulp to ferment and disintegrate, while the heat generated prevents germination.

After de-pulping, the recovered nuts are often boiled in water for about 40 minutes, using the traditional three-stone cooking stoves. One of the objectives is to loose the kernels in the shell to help de-shelling. This process can be done by using a jacketed kettle.

The boiled nuts are sun-dried on a mat, cemented ground or drying racks. This is to loosen the kernel from the shell for easy de-shelling. If drying by machine is required, hot air drying oven or microwave drying machine can be used.

The dried nuts can be cracked by using a mortar and pestle or between two stones to remove the shell. There is also sheller/separator suitable for processing shea nuts.

The kernels are washed with clean water. This can be done using a kernels washing machine.

The washed kernels are sun-dried to remove moisture. Hot air drying oven or microwave drying machine can be used in this process.

The kernels are sorted to remove bad seeds and impurities.

The dried kernels are pounded in a mortar and pestle or crushed in a crusher into small pieces for easy roasting. This can also be done using a kernels chopping machine.

10. Roasting of the kernels:

The crushed kernels are sent to the roaster and roasted to aid in oil extraction.

The roasted kernels are then ground in the grinding machine into a paste. 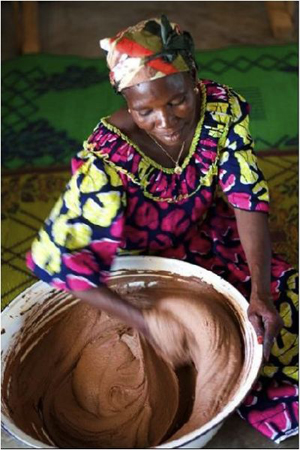 Traditionally the butter is extracted by kneading by hand. However, it can also be done by using a kneader. Pressing by hydraulic/screw press, or solvent extraction can also be utilized followed by refining with refining equipment.
By kneading manually, women churn the paste by hand with cold water added gradually. The mixing breaks the emulsion, causing the fat to break away from the cake. Hot water is then added to melt the fat and set it free from the cake, which facilitates separation. Then a large amount of cold water is poured into the mixture. With stirring continues, the fat floats while the cake settles to the bottom. Women collect fat from atop of the water layer.

The fat is boiled on fire to dehydrate it. The actual butter is skimmed off the top. This boiling process can be done by using the jacketed kettle.

The butter is then filtered through a filter cloth, allowed to cool down and solidify. Gradual stirring is done to facilitate cooling.

The butter is then packed in airtight containers. This can be done by using filling machine. The cake is also packed in bags ready for sale to the feed millers.